I’m smack in the middle of a personal challenge to read at least one book every week. The erudition section of this blog is my attempt to chronicle my challenge and galvanize a lifetime of curiosity and learning. If you have read any of these books before, or happen to pick one up and find it interesting, I’d love to hear your thoughts too. 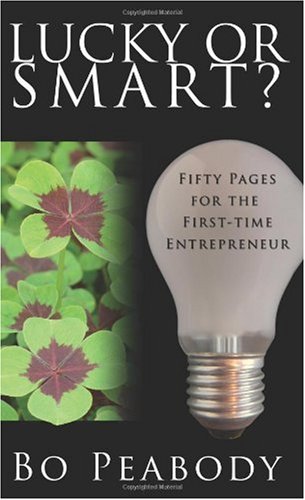 Remember Tripod.com? You know, back in the dinosaur age of the internets, when only the über-smart and curious intellectuals (read: nerds) were the ones who ventured into the land of dial-up? Yeah, I was there, and I’m pretty sure I had a “homepage” on Tripod.

Well the guy behind Tripod, it turns out, was a kid—Bo Peabody. After nursing Tripod as a pet project through college, he hired hippie programmers to wrangle the code that he himself didn’t know how to write. Supervised by his economics professor, Tripod.com began as a how-to site for-and-by college students. As soon as he unleashed the code monkeys, however, they transformed it into a publishing platform, allowing anyone with an Internet connection to create their own personal homepage.

Fast forward six years. Peabody sells his company to Lycos for a reported $58 million in stock. Rock on.

After selling his company, Peabody was often asked, “Were you lucky or were you smart?” His answer, in all its simplicity, captures the spirit of the entrepreneur and the strategist alike—”I was smart enough to realize I was getting lucky.”

The more I think about it, the more I realize the profundity of this statement. It takes a certain degree of awareness and intuition—you know, the kind of stuff they don’t teach you in school—to realize you are getting lucky. And it takes another kind of sixth-sense to know what to do with your luck. (Think about the stereotypical lottery winner that goes bankrupt in six months.)

It was interesting to me how much Peabody wrote about the difference between B-students and A-students. For him, A-students will end up being managers; they are good at following directions and working on a certain task for a long time. By contrast, B-students are made to be entrepreneurs, they know a little bit about a lot of different things and they get distracted easily.

I’ve thought about this dichotomy. I typically get B’s (and occasionally C’s), but if I really want to I could get A’s in all my classes. (I know, that sounds like a cliché—but I really could, I’ve done it many times before.) But the thing is, in a typical classroom setting, you can only learn as fast as the dumbest kid in the class. Sad to say, but I believe it to be true. I also have the typical entrepreneurial ADD—after only so long in a subject, I get bored. In my own self-education, I jump from reading philosophy to nutrition to travel books. Next up—chemistry. I think this allows me to draw parallels from one discipline to the next. For example, a concept from chemistry might help me understand a philosophical concept. Or I could be full of shit, I really don’t know.

I was smart enough to realize I was getting lucky.
—Bo Peabody, Lucky or Smart

Maybe this ADD is just an excuse for lack of discipline. I don’t have any evidence for this but I truly believe learning about multiple subjects helps you internalize one subject while you learn about the other. I also think that studying one subject intensely for a short period of time (say, 2-4 weeks) beats learning every subject at once.

And this is exactly what an entrepreneur must do. If there is a problem in product distribution, he must spend a short time learning about the problem and then finding a solution (or finding the right guy to find the solution). But I really don’t think this is being entrepreneurial; I think it’s just being resourceful. Any profession worthwhile could use a little bit of resourcefulness.

Moral?—Self-educate, and read Lucky or Smart.

At only 58 pages, this book made for a very quick read. Peabody’s writing voice is very casual and quick—often witty and humorous at times. For any entrepreneur, Lucky or Smart will give you a fantastic insight into the inner workings of the mind of an entrepreneur.